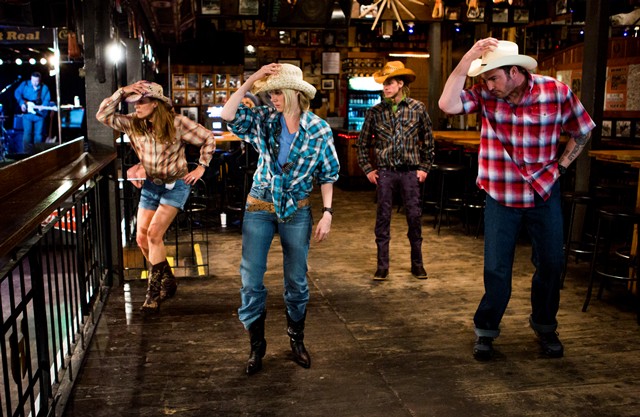 Joanne, Holly, Darren and Jody practice their moves at Ranchman’s in Calgary for a challenge on The Amazing Race Canada.

Gameplay unbecoming a courteous, polite national identity made an appearance on The Amazing Race Canada Monday as one team went back on its word and another schemed to keep info from their fellow racers. The third episode also saw some wrong turns, radical changes in placement and a few tush pushes to boot. Yee to the haw, let’s go to Alberta!

The most interesting developments, plot-wise, came while the seven teams were making their way from Vancouver to Calgary. First-place team Holly and Brent used their lead to hide all the Alberta maps in the airport convenience store before they made the 7 a.m. hop to Cowtown. Along for the ride on the early flight are Hal and Joanne, Jody and Cory and Darren and Kristen.

Sister act Vanessa and Celina are on the 8 a.m. flight along with Jet and Dave and the two Tims (Sr. and Jr.), but asked at check-in if there was room on the earlier flight. And just like that, the team that seems to be running the weakest race leaves its closest competitors in the dust. Good move, girls. 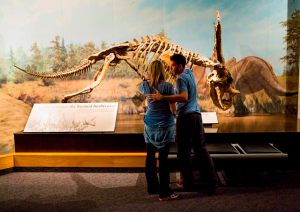 Holly and Brett look for clues at the Royal Tyrrell Museum on The Amazing Race Canada.

And their game receives another boost on the flight. Darren and Kristen give their second Express Pass to Vanessa and Celina, since, as Kristen says, “We don’t feel like the sisters are as much a threat to us” as Holly and Brett are.

This, however, breaks the promise the young couple made on the first night of the race. Brett proposed that the team that came in first would award the second Express Pass to the next team in their alliance to hit the Pit Stop. While the sisters are in the alliance, as are Hal and Joanne, the hippies should give the pass to Holly and Brett, as they came in second.

That doesn’t keep Kristen from being offended when Brett questions her integrity while they’re watching their partners attempt the Roadblock in Calgary, though. One team member has to perform a complicated line dance routine at Ranchman’s western bar before receiving the clue to the next task. Hal and Joanne are first in, first out, while Jody and Cory drop from second place to sixth.

“It’s frustrating. I know all the moves, but I keep tripping over my own carbon-fibre feet,” Jody says. (He lost both his legs below the knee while serving in Afghanistan.) The brothers spend more than three hours in Calgary’s iconic cowboy bar, with all teams but the Tims passing them by. Jet and Dave make the biggest move, jumping from seventh to fourth. All that cheerleading experience finally paid off, Dave. Gimme an A! (For Alberta or Amazing Race Canada, your choice.) 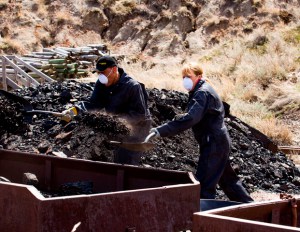 Hal and Joanne put their backs into it during the challenge at the Atlas Coal Mine Museum on The Amazing Race Canada.

Next stop: the Hoodoo Trail in Drumheller. Or, as Hal likes to call it, the “Whoo Dees.” Once they make the hour-and-a half-journey (in big-ass trucks, naturally), the teams must choose either lump by lump — fill a rail car with coal at the Atlas Coal Mine Museum — or bone by bone — assemble a dino skeleton at the Royal Tyrrell Museum). All but Holly and Brett choose to get dirty and revisit the area’s coal-mining past.

It’s a smart decision by everyone but the doctors, who get hung up putting together the 46-piece dromaeosaurus. While Holly gets increasingly frustrated, Brett tries to get her to can the negative talk, to little avail.

Back at the mine, the two Tims come up with the brilliant idea to lift the coal-filled wheelbarrow up over the lip of the rail car and empty the contents into it, rather than shovelling it out again.

That smart cookie move is crunched, however, by what comes next: the clue tells teams to make their way to Horse Thief Canyon for the Pit Stop. Tim Jr. recalls seeing a marker for the landmark on their drive into Drumheller, so off they go. Having made the same mistake, however, I can say he is referring to Horseshoe Canyon, which is southwest of town. The Pit Stop is north of Drumheller. It takes directions from a police officer to get the two Tims going the right direction, but it’s too little, too late, as they hit the mat in last place, behind Holly and Brett.

Luckily for them, this is the first of three non-elimination legs of the race. That means during the next portion, they’ll have to perform a Speed Bump, which is an extra task that the other teams won’t have to do.

As the teams prepare to head to the Northwest Territories and the Yukon, Hal and Joanne lead the pack, followed by Kristen and Darren, Jet and Dave, Vanessa and Celina and Jody and Cory, while Holly and Brett are mere minutes ahead of the last-place Tims.

So, what did you think of Darren and Kristen’s move to give the Express Pass to the sisters, rather than Holly and Brett? And how about hiding all the maps in the store? (I bet they would have bought them all if they’d had the cash.) Smart or unsportsmanlike? And who would have thought that Dave could pull off those moves at Ranchman’s? Share your thoughts below and we’ll see you back here next week as the teams head north.
The Amazing Race Canada airs Mondays on CTV.

This site uses Akismet to reduce spam. Learn how your comment data is processed.