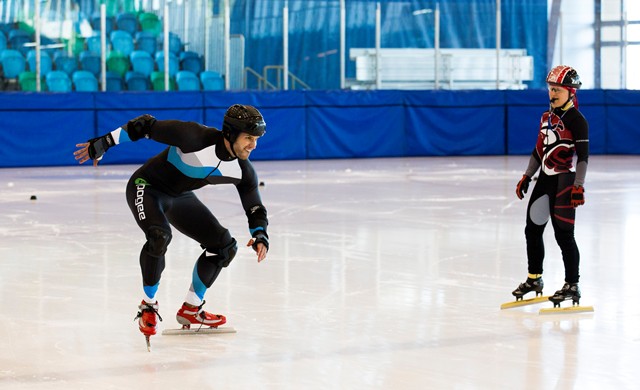 Jet gets ready to hit warp speed in the speed skating challenge during the second episode of The Amazing Race Canada.
Posted by:
Ruth Myles

Welcome to the second episode of The Amazing Race Canada, or, as a few teams should call it, A Series of Unfortunate Events.

The eight remaining teams are in Kelowna, B.C. Kristen and Darren are first out of the gate at 5 a.m. Their clue instructs them to catch a plane to Vancouver, which they do, along with Holly and Brett, and Jet and Dave.

Hal and Joanne also make the 7 a.m. flight by going standby, which impresses the sister act of Vanessa and Celina. “They are very smart,” say the sisters, who apparently don’t travel much … or watch a lot of The Amazing Race, ’cause that’s a pretty basic move.

Married doctors Holly and Brett took an early lead in the Vancouver airport.

(And another Amazing Race standard has already reared its head: the dreaded curse of the cab. Team BodyBreak, third at the start of the day, hopped into a cab only to find it was short a driver. This allowed Jet and Dave to leapfrog them in the standings. Spoiler alert: taxi trouble will come into play again later this episode.)

While Vanessa and Celina, Tim Sr. and Tim Jr. and Jody and Cory check in for the next flight at 8:20 a.m., the cowboys decide to hit a bank machine before going to the airport. That decision, plus their seeming inability to work an ATM, costs them, as they land on the 10:55 a.m. flight.

Once in Vancouver, teams take the SkyTrain to the Richmond Olympic Oval. There, one member of each duo must complete two laps around the track in full speedskating gear in less than one minute, 30 seconds. While it sounds difficult, even someone who’s never been on skates before can finish the task, as Brett ably demonstrates.

More challenging, for Kristen and Darren anyway, is finding the place. They hop off the train at an earlier stop and run around in circles looking for it. Coming from the town of Fairmont Hot Springs, population “300,” means they usually know where they are, Kristen says.

Darren and Kristen got off at an earlier SkyTrain station than their competitors in Richmond on The Amazing Race Canada.

While the doctors (Holly and Brett) admit they’re not a physical team, they think their smarts will take them far in the race, and calling for a cab to come and get at the Oval — rather than wandering the streets like Jet and Dave — pays off.

The married couple are first at the next stop: a Detour at the Millennium Gate in Chinatown. Teams must choose between Draw It and Dance It. The first involves walking to a local tea store, downing a cup and then memorizing a symbol of the Chinese Zodiac on the bottom of their cups. Then, they must go to Dr. Sun Yat-sen Classical Garden and each reproduce their symbol with traditional brush and ink. If a calligraphy expert approves of their handiwork, they get the next clue.

For Dance It, the teams receive a piece of paper with four items on it … in Mandarin. They have to pick up pieces for a lion dance costume at four stores, then head back to the Chinese Cultural Centre and watch a performance of the traditional dance. Then, they must perform it to the satisfaction of a judge before they get the next clue.

Celina and Vanessa had to hit the tea shop again after their first try at recreating symbols of the Chinese zodiac failed to impress the judge.

Holly and Brett chose Draw It, and perform the task with a minimum of fuss. Kristen and Darren, meanwhile, are dropped in the wrong location by their taxi driver, and drop to fourth before they can find the Gate. Jet and Dave choose Dance It, but change their minds after searching for the stores for “three hours.”

Next up: heading to the port in the inner harbour to climb a 76-metre crane and scan the surrounding area with a pair of binoculars for the Pit Stop. Again, Kristen and Darren can’t catch a break when their cabbie drops them at the wrong location. This gives Vanessa and Celina a boost when they spot the couple dockside, as the sisters have made up the hour and 20 minute difference between the flights earlier in the day.

In the end, Holly and Brett are first at the Pit Stop atop the Vancouver Convention Centre, and are awarded two airplane tickets to Asia in addition to the win. They’re followed by Hal and Joanne and Jody and Cory (who made a huge move in the standings, jumping to third from seventh). Then, it’s Kristen and Darren, Vanessa and Celina, Tim and Tim and Jet and Dave. That leaves the cowboys to ride off into the sunset as Jamie and Pierre are eliminated from the race.

Jamie and Pierre say leave The Amazing Race Canada with their heads held high and cowboy hats firmly in place.

Next week, get your yee haw on as the teams head to Calgary, no bull. (Okay, maybe a bull or two. After all, it isCowtown.)

Did the second episode of The Amazing Race Canada live up to your expectations? Have any teams earned your vote for the one who will take it all? And who did you yell at louder: Jamie and Pierre for that ill-thought-out trip to the bank machine, or Jet and Dave for bailing on the lion dance task when they were so close to completing it? Share your thoughts below, and we’ll see you back here next week.