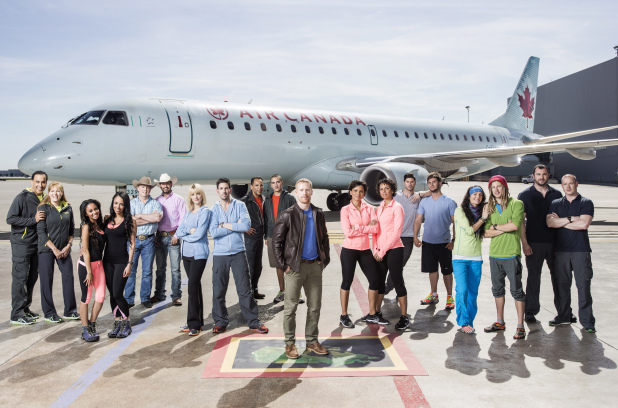 WHERE, Canada’s travel planner, is excited about a new new television show that will showcase the ultimate travel experience across Canada: With the knowledge that most Canadians have not travelled beyond their own province, The Amazing Race Canada gives Canadians the opportunity to explore Canada and discover the country they love. Based on the popular, nine-time Emmy award-winning program The Amazing Race, The Amazing Race Canada launches its first season on CTV on July 15, 2013. Hosted by Olympic gold-medalist Jon Montgomery, the show features nine all-Canadian teams travelling throughout the diverse Canadian landscape through urban centres and remote outposts while completing a series of tasks and facing familiar challenges like U-Turns and Road Blocks.

Fitness icons Joanne McLeoad and Hal Johnson of Body Break are two of the series’ competitors; a perfect fit for the show since the Body Break brand is itself a very familiar, unique, and important part of Canadian pop culture and history. Many Canadians can easily recall the iconic television fitness segments hosted by Hal and Joanne, encouraging viewers to “keep fit and have fun”! You can read more about about Body Break and watch Hal and Joanne’s Amazing Race Canada audition video on their website, www.www.bodybreak.com.

Joanne McLeod spoke to WHERE to discuss her team’s The Amazing Race Canada experience. She says that her and Hal have been very busy since the announcement of their participation on the show came out, but are pleased to see the excited reactions of Canadians: 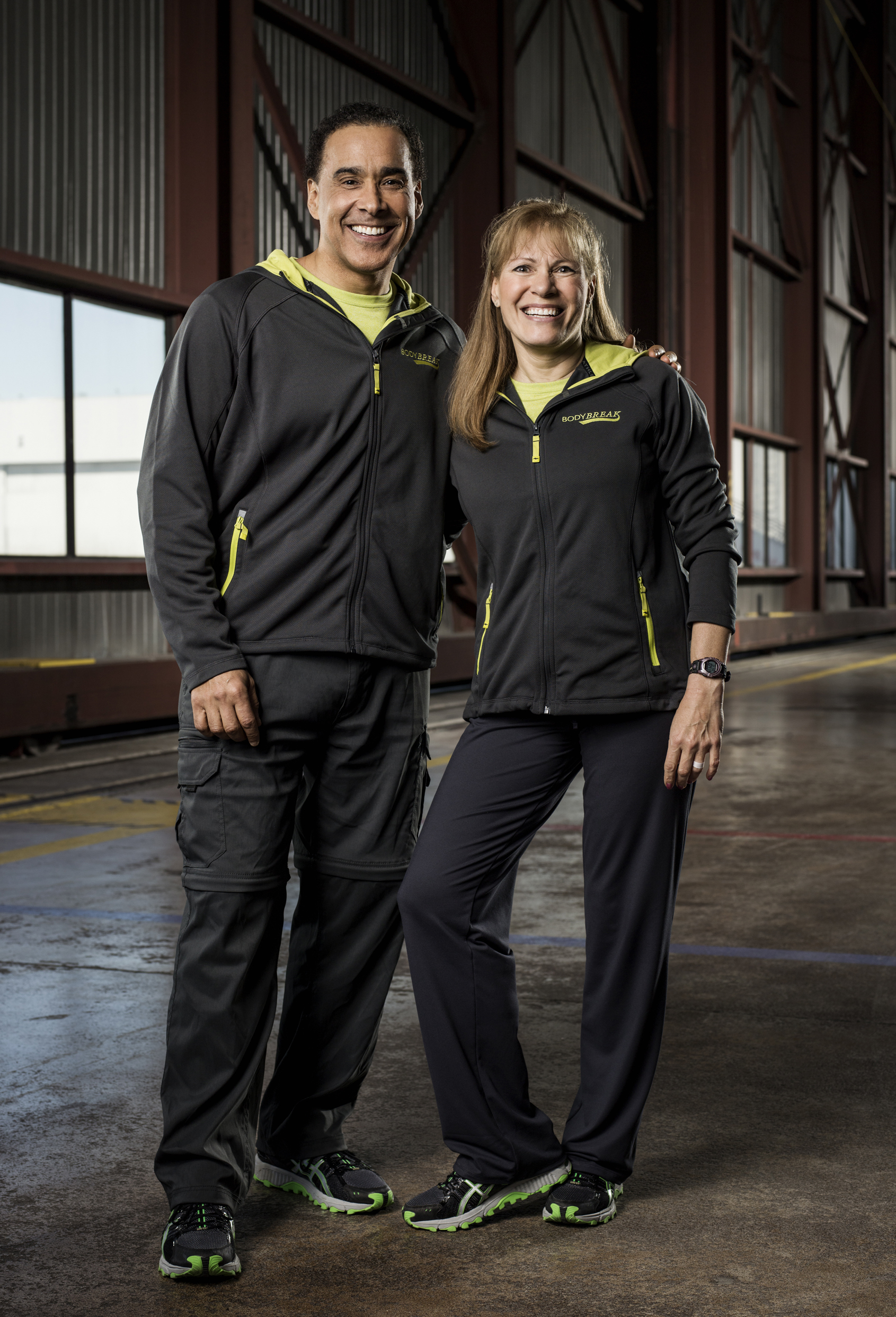 “We are huge fans of The Amazing Race! Hal and I have watched all 22 seasons; we watch it together on Sunday evenings when it airs and that’s our date night,” Joanne says. As the #1 reality program in Canada, Joanne recalls a familiar experience: settling in at the end of the weekend to watch the latest episode of The Amazing Race, wondering if your favourite team will make it through another leg despite consistently coming in second-to-last place; if the team that argues all the time will actually mess up this time; and what exotic destination the teams will travel to next.

“Whenever we would watch we analyze [the show],” Joanne continues. “Hal and I would analyze the road blocks and discuss what Hal could do and what I could do, and which tasks would challenge the both of us!” Fans of the The Amazing Race can surely identify with this — admit it, you’ve definitely watched the show and strategized a plan, thinking “I could do the physical challenges, but my partner would have to do any challenges where you have to eat weird bugs” or “I would never lose my passport!”  The Amazing Race incorporates physical competition, logic and strategy,  relationship dynamics, stunning scenery, logic and, most unpredictably, luck — the dynamics of the show easily invites commentary from viewers, and is what makes the show so engaging and one fans can easily relate to. You’ve probably even thought about who you would select to run the race with you — would you form a team with a best friend? Your romantic partner? Your parents or children? For Hal and Joanne, who have been a remarkable team on Body Break for 25 years, deciding on a teammate was easy; the hard part for them was deciding whether to audition to run the race at all.

“We wanted to participate, but we didn’t know if we would have a chance of being chosen for the show. We knew there would be a lot of people applying. Plus, we weren’t thinking The Amazing Race Canada — we didn’t think they would create a whole show for Canadian contestants! We were hoping thatThe Amazing Race would open up to Canadian applicants after a few seasons” Joanne explains. When it was announced that The Amazing Race Canada would have participants travel only within Canada, many fans hoping to become contestants had their dreams of worldwide travel — which is easily one of the appeals of the American version — dispelled. “To be honest it was disheartening at first to find out it wasn’t taking place around the world,” Joanne admitted, “but we quickly realized that there is a lot of Canada that we hadn’t seen, and for viewers there are a lot of beautiful places in this country that people need to see.”

“Hal and I are very proud Canadians,” Joanne continued, “and so when we thought about pairing travel across Canada with the dynamics of The Amazing Race… it just made a lot of sense to have the race in Canada.” Indeed, any time the American version of The Amazing Race took contestants to a Canadian location, there is admittedly a sense of national pride as you see your home town or a familiar city showcased on the small screen. Why not make a whole show that highlights all the wonderful regions in the country, and is a great testament to Canadian travel?

Hal and Joanne’s career had taken them to many places in Canada prior to filming the show — Joanne remarks that some of their favourite Canadian travel memories include horseback riding in Lake Louise, AB to the mountain top Lake Agnes Tea House, snowboarding in Whistler, exploring the beautifulAlgonquin Provincial Park in Ontario, and cycling from Lunenberg to Halifax in Nova Scotia. “When we thought about where we traveled to before the race, it was easy to realize that Canada is so diverse and there is always more to explore. And, once you spend time in an area, you appreciate the issues that each place has to deal with. You become a lot more compassionate about the messages that are shown in the media when you venture out; you appreciate more of Canada and its place in the world. That’s whats exciting about getting the opportunity to travel.”

How did this athletic duo prepare for the race? “Considering our age [Hal is 57; Joanne is 54] we’re in great shape, but there are things you can do [during the race] to make sure you’re ready to perform physically, like constantly replenishing nutrition — we would take sport gels in fanny packs because they are a quick source of energy that’s easy to take. Everything you know about nutrition can easily get lost as you think about other things when you’re racing… and if you go “brain dead” during a leg it costs you. Every team makes mistakes and it’s the team that makes the last mistake that causes them the elimination or having to do a speed bump, because they run out of opportunities during that leg to make up the time. With any show it always looks easier than actually participating. It always looks easier on TV! You see an hour of the show on TV, and like everyone we think ‘we can do that’ or ‘that looks so easy’ while watching it. But really you’re out there racing for up to twelve hours at a time and each team is scrambling and just trying to get from A to B without thinking.’ It’s impossible to avoid the bad habit of reacting before thinking. You don’t have time to think on The Amazing Race, you have to perform!

Hal and Joanne will be tuning in alongside other Canadians to watch The Amazing Race Canada series when it begins on July 15: “We’ll definitely be watching, because we don’t know what the other teams did!” Joanne explains. “While you’re racing you’re focused on your own task and you might not ever see another team alongside you. We’ll be following everyone’s journey through the ups and downs and see how they handled each challenge. We’ll also be blogging at www.bodybreak.com to recap each episode and give a commentary of some of the things that happened, discuss what we were thinking that led to a particular decision, explain why we chose one option versus another… it will provide some behind-the-scenes extras about our time running the race.”

The timing of the show was perfect for the Body Break duo: Hal and Joanne celebrated 25 years of Body Break (and, appropriately, their 25th anniversary together) on June 8, 2013, and what better way to celebrate than by runningThe Amazing Race Canada? Can the two of them also celebrate a win on The Amazing Race Canada? That, of course, they can’t say yet — but all will be revealed throughout the season!

“Keep fit and have fun?” I asked. How could I resist saying the famous tagline to the Body Break icon herself?

“How many times did you say that during the race?”

Ready to plan your own amazing adventure across Canada? Check out WHERE’s Best of Canada stories and see where you’d like to travel to next!